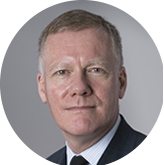 Michael W. Lodge is a British national. He received his LLB from the University of East Anglia, and has an MSc in marine policy from the London School of Economics and Political Science. He is a barrister of Gray’s Inn, London. Prior to his election as Secretary-General of the International Seabed Authority in July 2016, he had served as Deputy to the Secretary-General and Legal Counsel. Other professional experiences include serving as Legal Counsel to the ISA (1996-2003); Counsellor to the Round Table on Sustainable Development, OECD (2004-2007); Legal Counsel to the South Pacific Forum Fisheries Agency (1991-1995). He has also held appointments as a Visiting Fellow of Somerville College, Oxford (2012-2013), an Associate Fellow of Chatham House, London (2007) and a member of the World Economic Forum’s Global Agenda Council on Oceans (2011-2016).

With extensive knowledge of the United Nations and other international organisations, Michael Lodge has facilitated high-level multilateral and bilateral negotiations at international and regional level. His significant achievements include his pivotal role in the ISA from its inception in 1996 and in helping to create and implement the first international regulatory regime for seabed mining. He also contributed to the future security of global fish stocks by leading the process to create the Western and Central Pacific Fisheries Commission from concept to its establishment as the largest regional fisheries management organization in the world, also serving as the interim executive director of the Commission. He was instrumental in advising the Pew Charitable Trusts on their support for the Global Ocean Commission and also acted as an adviser to the Commission on international law of the sea and ocean policy.