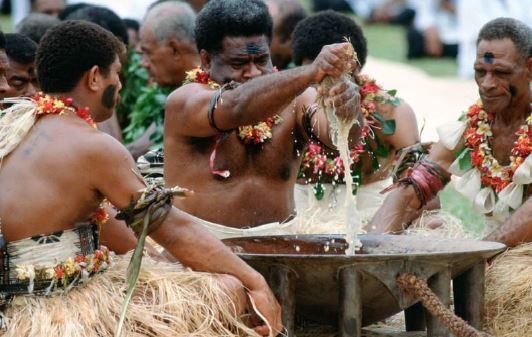 This scenario note has been prepared in order to better appreciate the significance of the Fijia Welcome Ceremony to be performed at 9:00am on Monday 5 June, 2017 in the United Nation General Assembly Hall

Before the ceremony begins, all guests are expected to be seated and observe silence. In th Fijian culture, standing up, loud conversations or walking in the venue where the cultura ceremony is being performed is considered as highly disrespectful and extremely insulting. I the Fijian tradition, warriors in full ceremonial costume and armour would be posted a strategic positions to guard the dignity of the ceremony and ensure there is no disturbanc from the moment the cultural performance begins until it ends

The heart of a Fijian traditional welcome ceremony is called the Yaqona Vakaturaga. A tano (wooden bowl) carved from a trunk of the vesi (lntsia bijuga, a very hard wood with chiefl associations) is placed in front of the honoured guest at a respectful distance, with the sa (cord of plaited coconut fibre with white cowry shells attached) extended towards the positio of honour. Men in traditional dress are arranged around the tanoa; the positions vary i different parts of Fiji, but there is always one seated directly behind the tanoa whos responsibility is to prepare the yaqona

Water is poured, usually from a traditional earthenware vessel or bamboo container, an grated or pounded yaqona placed in a bundle of vau (Hibiscus tiliaceus) fibre through which it i strained. At some point a chant is sung by the group seated behind the tanoa, on occasions t the accompaniment of a woodedn drum (lali). The person preparing the yaqona then raises th strainer and wrings out the drink to allow the matanivanua to judge whether the consistency i correct. If more water is needed, the matanivanua says "wai", and if not, the word is "donu (good)

The yaqona-mixer then hands-over or sometimes tosses the strainer to a person behind wh shakes out the dregs and returns it to the mixer, who uses it to wipe the rim of the tanoa announces that the yaqona is ready, and claps three times. Fijian clapping (cabo or abo) is don with hollowed hands as a sign of respect

The yaqona is now ready to be served. The Server coils back the sau (coconut fibre cord), pick up the bilo (coconut shell cup) and holds it over the tanoa to be filled. He then turns, arm extended holding out the bilo, and sways and steps towards the honoured guest to the rhyth of the chant. The chant ends abruptly, he fills the chief guest's bilo, the guest claps with cuppe hands and drinks the yaqona slowly, in one draught, to the clapping of the chanters. When th guest has drunk, he or she places the cup on the mat, and all present clap independently. Nex is the matanivanua's turn to drink, followed by a select number of other guests and thei respective matanivanua. The mixer announces that the yaqona has been drunk, claps and s ends the yaqona vakaturaga

Much of Fijian culture is grounded in the concept of equilibrium that all things are done in pairs This is why for every cup of yaqona drunk by a guest of honour, a corresponding cup (rabe) i drunk which does not count in order of precedence, usually by a matanivanua, but sometime by anyone who wishes to honour the individual who has just drunk

A more specific program outlining the sequence of proceedings for the Cultural Welcom Ceremony will be available in the General Assembly Hall at 9:00am on Monday 5 June.

For a better experience, view this website with Microsoft Edge, Firefox, Chrome, or any mobile device